When the pandemic struck in 2020, Mary Brown’s operations barely skipped a beat. “When everything was closing down, our team got together and made some critical decisions that allowed us to be here today,” says Hadi Chahin, president and CEO, MBI Brands. “We are still benefitting from the that foundation. It’s an immense success story.”

One of the first decisions made by the leadership team was to cut their own salaries by 50 per cent so they would not have to lay off any staff. “We value our staff and want them to be a part of this company forever,” says Chahin. “We were willing to do that for as long as it would take. As it turned out, we turned a curve quickly and never looked back.”

Those early decisions paved the way for a period of exponential growth despite the myriad challenges within the industry. The company experienced record growth in 2020, a trend that continued in 2021, where system growth was 24.8 per cent, up four per cent from 2020. Top quarterly average unit volume increased to $1,875,000, up $135,000 from 2020. Also, the firm has marked 17 consecutive years of same-store sales growth in 2022.

A 100-per-cent Canadian owned-and-operated company, Mary Brown’s Chicken has grown from its roots in St. John’s, Nfld. in 1969 to become the largest Canadian quick-serve chicken restaurant and one of the country’s fastest-growing QSR brands.

It has tripled its store count in the last decade, opening 18 in 2020 and 21 in 2021. With 220 locations across Canada, Chahin says the brand expects to reach 245 locations by the end of 2022. “Our target is to open 39 this year and bit over 50 next year. Our biggest focus in Canada is on Ontario and Quebec. They are the largest markets for us.”

This year also saw the launch of MB Chicken Express, a smaller footprint of the primary Mary Brown’s Chicken brand. The first outlet opened in Toronto’s Rogers Centre in April, with plans to expand into select universities and airports in the near future.

A major turning point for 2022 was the acquisition of the 70-store Ontario-based Fat Bastard Burrito chain under the MBI Brands umbrella. Plans are to expand the brand across Canada.

And for the first time, Mary Brown’s is looking to expand beyond Canada. “Our biggest focus right now is Ireland and the U.K., which should be up and running in 2023. We also have some locations opening later this year in Pakistan,” says Chahin. “We are working on initial plans in the U.S. once we find a strong partner.”

Accolades are nothing new for the company. Winning the Pinnacle Award for Company of the Year follows a string of consumer awards in 2021, including a number-1 ranking on Best Canadian Fast Food Chains list from The Top Tens. Daily Hive rated its Big Mary as Canada’s Best Chicken Sandwich and named the brand Canada’s Best Chicken Restaurant.

In addition to consumer awards, Mary Brown’s was named one of Canada’s Best Managed Companies for three consecutive years from 2019 to 2021 and is a 12-year consecutive winner of the Canadian Franchise Association’s Franchisees’ Choice award.

The foundations for this recent run of successes date back to 2017, when Chahin assumed the role of CEO. He quickly went to work, building a high-calibre foundational team, and establishing a long-range expansion plan. “We wanted to diversify the team by bringing in people from different industries and backgrounds. We wanted to be thinking outside the box.”

The goal was to re-invent the brand and bring it back to life, he adds. “Our mission was to be the premier quick-service chicken brand in any market. We re-designed our logo, updated our go-to market position and strategies, and renovated our stores. We also established a Vision 2020 of where we wanted to be in three years. Now we are working on our Vision 2025 and Vision 2030 strategies.” That strategy is based on four foundational pillars: people and culture; growth and development; guest experience; and operator experience.

Mary Brown’s expansion has been bolstered by an aggressive and highly successful marketing program led by Chief Marketing Officer Jeff Barlow, which has brought brand recognition to new heights. For example, the company entered a five-year official partnership with the Toronto Blue Jays to become the official chicken restaurant of the baseball team, as well as launched a television ad campaign with the team’s closer Jordan Romano, a native Canadian from Markham, Ont., the home of Mary Brown’s headquarters. It also signed a deal with Toronto Raptors and Canadian basketball player Chris Boucher.

Other marketing efforts included menu innovations to appeal to younger, more adventurous consumers. Its Nashville Mary Sandwich and the Spicy Big Mary, for example, have been popular sellers and market differentiators. “The Spicy Big Mary is now our biggest seller since we introduced it in March,” says Barlow.

Mary Brown’s lit up social networks when it launched a crop-circle campaign complete with drone footage and interview with a local farmer. “The technology to create the massive logo at harvest time has never been done before,” says Barlow. “We generated a large amount of PR from that.”

During this year’s National Fried Chicken Day, Mary Brown’s featured its Signature 2 Piece Chicken & Taters at $4.99, which ended up being the highest revenue day in the company’s history.

Technology innovation is also key to the company’s success, including the launch of the MB app (400,000 downloads and counting) and plans for new business-intelligence tools to aggregate consumer sentiment across every input. “Our goal is to make things as easy as possible to deliver a premium experience, whether it’s through an app, in-store, or providing feedback,” says Barlow. “We’re very detailed when it comes to guest resolution. If something goes wrong, how fast can we fix that problem and make them feel great about their Mary Brown’s experience?”

On the franchising front, the team goes out of its way to engage quality franchisees with both the hospitality and people genes in them, says Chahin. “Whoever we bring in, we make sure they are here for the long term and not just because they needed to invest in something. We put a lot of applicants through a series of interviews with different departments to make sure they are a right fit for the business. They also spend time with other franchisees in the field to make sure it’s a right fit for them. It’s important to have people that care about our team, about the guests they serve every day, and the community when they go home.”

Community support has long been an integral part of the Mary Brown’s culture. Nationally it supports BGC Canada (formerly Boys and Girls Clubs of Canada). “We chose that because their commitment to supporting Canadian youth and creating better opportunities for them is directly in line with our own vision,” says Chahin. “We believe youth are the future of this country.”

In May of 2022, under the direction of owner and CEO Greg Roberts, Mary Brown’s launched an initiative to bring Ukrainian refugees to Canada, funding flights, and providing money to help them get established in the country as well as employment at a Mary Brown’s store. Roberts challenged other Canadian businesses to do the same.

Franchisees are also encouraged to participate in local charities, from food banks and community centres to hospitals or any other community-based causes of their choosing. For the last eight years, the company has run an annual fundraising day for the Janeway Children’s Hospital in Newfoundland & Labrador. Roberts also made a $500,000 donation to Dorset Collegiate in 2021, the high school in his hometown, to help local children get the best education possible.

Chahin describes his team’s leadership style as transformational and strategic. “We don’t believe much in corporate hierarchy, so there isn’t much red tape. We all work very closely together and try to push each other to think outside the box. To me it’s all about inspiring others to be innovative. We have even recruited trainers for professional development so we can keep evolving our team.”

While Chahin is keeping Vision 2025 and Vision 2030 details under wraps, he says the biggest focus is growth. A main project at this point is the acquisition of Fat Bastard Burrito and ensuring the company can maintain the same culture within both of its brands.

“We need to continue to support each brand to the best of our abilities without losing focus on success,” he explains. “There will be a lot of work this year learning how to maintain the culture, continue the growth of both brands locally and internationally, while at the same time improving processes, innovation, and profitability. We don’t want to lose a beat or lose the success we had. It’s hard when you are the top of your game to stay there. We plan to continue to improve.” 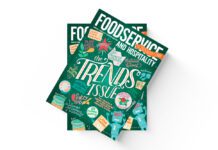 Kostuch Media Ltd. - May 28, 2019 0
Canadians are thinking more critically about where their food comes from and, as many strive to incorporate local products into their diets, sourcing homegrown...