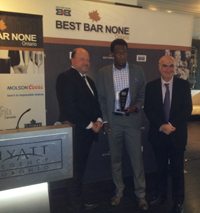 “This is an exciting day for Ontario’s liquor and hospitality industry,” said Tony Elenis, president and CEO of the Ontario Restaurant Hotel & Motel Association (ORHMA), of the two-year pilot program launched in 2012 in Toronto’s entertainment district.

“Best Bar None is a unique program in that it is voluntary, and it’s an industry-led accreditation program recognizing businesses who maintain the highest standards in the sale and service of alcohol.”

Best Bar None is an international industry-led accreditation program for liquor-licensed businesses, with two other Canadian programs in Edmonton and Calgary. Led by ORHMA in conjunction with various hospitality organizations, community and government organizations, the program is in its first year in operation in Toronto.

WITH Summit Offers a Blueprint for Change