SANTIAGO, Chile — The 34th biannual Congress of the World Association of Chefs Societies (WACS), is underway at the Casa Piedra Convention Centre in Santiago, Chile.

Some 20 Canadians — led by the Canadian Culinary Federation’s (CCFCC) national secretary, Simon Smotkowicz of the Shaw Conference Centre in Edmonton — had registered opening day, along with close to 400 delegates from more than 60 countries.

Smotkowicz, who is also manager of Culinary Team Canada, was appointed official voting delegate from Canada, replacing CCFCC national president, Judson Simpson, who was forced to cancel due to personal reasons.

The first day of the Congress was highlighted by the enthusiastic reuniting of old friends at the two headquarter hotels, the Sheraton Santiago and the Radisson Vitacura, and at the convention hall.

Behind the scenes, the WACS National Board held meetings as Congress delegates took advantage of three-hour bus and walking tours of Santiago, a city of about six million.

Canadian culinary stars hard at work at the congress include: 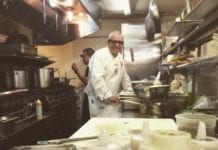