Yasser Qahawish leads a restaurant revolution in the breadbasket of Ontario

Before he studied culinary arts in college, before he trained under the talented hand of J.P. Challet, and before he helmed the kitchen at Toronto’s acclaimed Osgoode Hall restaurant, Yasser Qahawish was dishing out homemade sandwiches and coffee from this childhood home.

“When my older brother moved out and went to university, I turned his bedroom into a little café,” he reminisces. “I would actually charge my uncles and aunts to try to make a little money. I was only 14, but I served and made everything myself.”

Today, Qahawish is still doing things from scratch. As the owner and executive chef of Artisanale Café & Bistro in Guelph, Ont., this Montreal native completely transformed a revered local institution into a blossoming French-inspired resto. He’s forging partnerships with farmers and following his ingredients on their journey from seed to plate. Most importantly, he’s proving that taking risks in the restaurant business can pay off.

While studying at George Brown College, Qahawish did a stage at the Inn at Manitou in Muskoka, Ont., where he worked alongside Challet and fell in love with French cuisine. “It was an amazing experience,” he says. “And the more I discovered, the more I realized that French food culture was appealing and interesting to me.”

Post-grad, successful runs at top Toronto restaurants such as Auberge du Pommier, Lakes, The Fifth and the Corner House helped him hone his culinary style. But it was as executive chef at the Osgoode Hall restaurant in 1998 that he truly began to develop a passion for the Ontario harvest. During his eight-year tenure at the restaurant, he brought farm-fresh fruits and vegetables to the forefront of the dining room. Judges and lawyers ate up the idea at lunch, while critics poured on the praise. Not long after, the space opened to the public for dinner.

“We tripled our sales in the third year when all the articles came out, and it kept on going,” he says. “It was a success I saw through, and I guess when you do that it’s hard to walk away. [But] in the meantime, I was looking to start my own business.”

Qahawish’s commitment to local, seasonal and sustainable food was further solidified as he worked and cooked on weekends at Michael Schmidt’s biodynamic Glencolton Farms just south of Owen Sound, Ont. The rural life sat well with him, and he left the downtown core in 2006, settling in Guelph, were he re-vamped the city’s Bookshelf Café and gave the place a personal touch.

At Artisanale, most ingredients used in his classic bistro fare are sourced within a 200-mile range. He admits at first it was hard to win over the locals with his unique concept, but now, both in the café and the dining room, patrons happily feast on Qahawish classics like quiche, steak frites and croque monsieur.

Thanks to Artisanale’s rising popularity, Qahawish says his next step is to stay the course — to keep showcasing local flavours and make his business profitable. “I love making people happy, and food is my way to do it,” he says. “Food is what makes us. We are what we eat, as they say. And there’s a lot in that.” 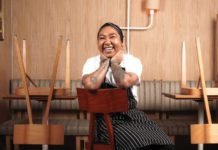 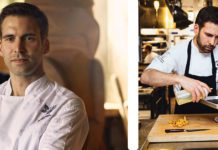