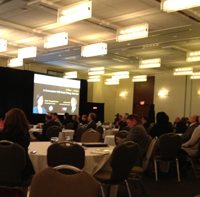 TORONTO — It was a day of networking, industry analysis and conversation yesterday as nearly 200 foodservice executives and media gathered at the Hilton Toronto hotel for GE Capital’s annual Canadian Restaurant Investment Summit (CRIS).

Dan McPhee, account executive for Google, kicked off the day by explaining how to use his company’s analytics to gain a competitive edge.

“[Technology] is changing the way people live their lives,” affirmed McPhee, revealing that two billion people are online and that mobile web has grown at eight times the pace of the desktop computer. To help appeal to today’s informed customer, the exec showed attendees how to use Google Trends to track Google queries and compare searches for other brands. “You can see where your competitors are strong, and you can make decisions based on that. It’s simple,” he said. In short, the rate of change is so astounding that successful businesses need to keep pace. “Push yourself, and force others to keep up with you,” encouraged McPhee.

The theme of change and evolving customer needs continued to permeate the discussion as Robert Carter, executive director for the NPD Group research firm, took to the stage. The analyst reviewed statistics from the annual GE Capital-commissioned Canadian Chain Restaurant Industry Review. Prepared by the NPD, in collaboration with Toronto’s FsStrategy, the study that’s released each year at the conference revealed that, although sales are expected to growth by 3.6 per cent to $67.9 billion in 2013, overall foodservice traffic remains relatively flat. “Customers are going out to eat a little less, and that’s creating challenges,” said Carter. “There’s a lot of operators fighting for 0.1 per cent of the market share.” In short, he said, it’s a challenging marketplace, but there is room to grow, once operators understand the increasingly informed customer and think strategically to succeed.

Other sessions throughout the day covered community sponsorship, design and construction, the growth of local chains, franchise relationships and the movement of western brands east, but a highlight was a Q&A with Starbucks Coffee Canada’s Annie Young-Scrivner. Andrew Bell, a Business News Network anchor, talked to the president about the brand plan to open more than 150 stores across Canada this year, its partnership with Target Canada and the new name of its blonde roast. True North, which was named by a customer, will launch in July, as will a line of packaged foods. Meanwhile, the Starbucks promise was the centre of conversation. “Our mission is to inspire the human spirit,” said Young-Scrivner, stressing the brand goal to connect with the customer. And, as that customer continues to evolve and grow, it’s clear enriching the in-store experience is increasingly essential to the foodservice industry’s ongoing business success story.