If there were a recipe for successful entrepreneurship, the ingredients list might look something like this: a mountain of ambition, a truck load of courage, tireless vision and endless tenacity. Making a go of it on your own is kind of a big deal, not to be pursued by those easily discouraged. The late Steve Jobs, co-founder and CEO of Apple, and a prolific visionary, once said: “I’m convinced that about half of what separates the successful entrepreneurs from the non-successful ones is pure perseverance.” The stories that follow highlight five of Canada’s foodservice industry entrepreneurs — their approach to business, their advice to aspiring independents and their plans for the future. In the fiercely competitive restaurant business, this is how you make your mark… 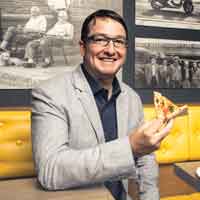 When friends Christian Bullock, Justin Lussier and Jason Allard teamed up to launch a pizzeria, they wanted to bring something innovative to the Canadian restaurant scene. “In 2007, there were only a few people focused on Neapolitan-style pizza. Now, there are dozens, but we’re still the leader,” Bullock says of Famoso Neapolitan Pizzeria, a business that has grown into a 30-store franchise with locations in British Columbia, Alberta, Saskatchewan and Ontario. Famoso hand-mills Italian tomatoes for its sauce and fires pizzas in imported ovens for 90 seconds at 900 °F. Bullock brought years of entrepreneurial know-how to the partnership. His first business, The Heights Taphouse, opened in 1997 in his hometown of St. Albert, Alta., and quickly became the local hot spot. Next, a nightclub called The Burgundy Room, followed by another sports bar, The Canadian Brewhouse, in Edmonton. His next start-up was the now 60-location Wok Box franchise, serving fresh, fast, Asian-inspired dishes. “We opened in 2004 and by 2009 we had 72 stores. We learned a lot of things the hard way, so I understood [with Famoso] the importance of investing in infrastructure and getting the best talent on board,” he says. 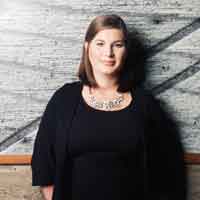 When Sarah Blackmore met her now husband, Dan Blackmore, it wasn’t just love, it was a match made in burger heaven. She had completed studies in nutrition and foodservice management at Northern Alberta Institute of Technology (NAIT) and he had plenty of experience in the restaurant industry. Along with partner and Red Seal Chef, Michael Ringland, the duo opened Bin 4 Burger Lounge in Victoria in 2011. Since then, the company has grown to three popular locations in the city, all serving gourmet burgers made from ethically raised, hormone-free meats and house-made sauces. Of course, there’s something for everyone, including vegetarians and folks with other dietary preferences. “We like to stay local and appeal to a large customer base,” says Blackmore, who was ranked 17th on PROFIT/Chatelaine’s W100 2016 Canada’s Top Female Entrepreneurs. Bin 4 pours pints of local craft beer and supports other nearby suppliers as much as possible. In July 2016, Blackmore and her team opened a new concept called Lot 1 Pasta Bar, also in Victoria, focusing on fresh pasta, made in-house daily, as well as local wine and beer, and handcrafted signature cocktails. 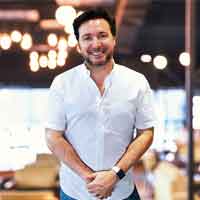 After selling his previous company, INEX Corporation, for a cool $US45 million, Alex Barrotti took time off and moved to the Caribbean. That’s where he befriended Yoshi — a sushi restaurateur who wished there were a way for his staff to easily take orders on the patio and have them automatically sent into the restaurant. This sparked an idea for Barrotti, a 25-year technology industry veteran, and when the iPad was released soon after, it came to fruition. TouchBistro, an iPad-based point-of-sale system launched in June 2011 and has since become the top-grossing food-and-beverage app in more than 37 countries in the Apple App Store — deployed to 10,000 iPads in 6,000 restaurants. The company has received accolades galore, including Best POS System for Restaurants 2016 by Business News Daily and back-to-back Entrepreneur/Founder of the Year for 2014 and 2015 by Best in Biz Awards. “Any business owner can buy an iPad today, download TouchBistro and be up and running in half an hour,” Barrotti says. “It’s dramatically cheaper and more accessible than a traditional POS system and the software is updated every eight weeks with new capabilities, so it’s never obsolete.” 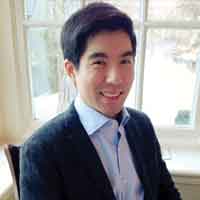 Working as a regional manager for a large chain of restaurants, Peter Chiu spent a lot of time eating fast-food lunches in his car. “I didn’t feel good about it and I wanted to come up with something that would be fast, but also healthy and delicious,” says the Ryerson University hospitality and tourism management grad. Chiu believed Canadians were looking for an exotic, flavourful option. So, rather than spending their honeymoon in the Maldives as planned, he and his wife packed their bags for three weeks in Thailand and Vietnam, where they immersed themselves in the food culture — farming, cooking and exploring markets. “I wanted to bring home the vibrancy of fresh food, spices and flavours,” he says. Customers choose from one of four bases — salad spring mix, jasmine rice, brown rice or rice noodles — plus whatever veggies, protein, sauces and toppings suit their fancy. The first Basil Box opened in July 2015 in Mississauga’s Square One Shopping Centre food court. The second location — a 2,700-sq.-ft. flagship — launched in February 2016 at the base of Ryerson’s Student Learning Centre. Two additional Toronto locations are scheduled to open by February 2017. 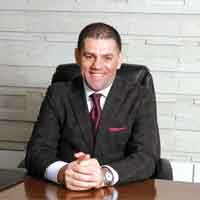 For a guy who describes himself as someone who doesn’t know how to fry an egg, Mohamad Fakih has done well building a restaurant empire. After arriving in Canada from Lebanon in 2000, the gemologist started a jewellery business. But one afternoon his wife asked him to pick up some baklava and everything changed. He visited a shabby Middle-Eastern restaurant tucked away in an industrial plaza and was compelled by the owner to help turn it into something better. Cue 2007 and Paramount Fine Foods debuted, dishing up Middle-Eastern cuisine and culture, complete with oven-fired pita bread and Halal butchery. “The best asset we had was our great chefs. They we here from the Middle East and knew exactly what they were doing,” Fakih says of those early days. The learning curve has been steep, but Paramount is flourishing, with 55 locations in Canada by the end of this year, along with spots in the U.S., Lebanon and Pakistan. The company has its own commissary kitchen, a food truck and recently launched Fresh East by Paramount, a Middle Eastern sandwich shop. Fakih was an Ernst and Young finalist for Entrepreneur of the Year in 2013 and highlighted as one of The Globe and Mail’s Torontonians to Watch in 2016. More than 150 Syrian refugees have found employment in his restaurants since arriving in Canada this year.