More specifically, 94 per cent of the “white tuna” sold was escolar — a snake mackerel that has a toxin with “purgative” effects for people who eat large quantities — and 13 different types of fish were sold as “red snapper,” including tilapia, white bass and ocean perch.

Recent investigations by Oceana in Boston, Miami and Los Angeles, found mislabelling rates of up to 55 per cent for seafood sold in sushi bars, restaurants and grocery stores. “Everywhere seafood is tested, fraud has been found. Oceana’s studies have shown this is not just a regional problem, but a widespread, nationwide issue that needs federal attention,” reads the Oceana statement.

Oceana’s investigation focused on species substitution or the swapping of a lower-value or lower-quality fish for a more desirable species.

From Sourcing to Purchasing, How Is Seafood Measuring Up? 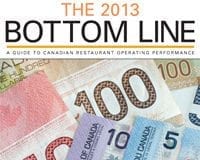 The 2013 Bottom Line Report: A Guide To Canadian Restaurant Operating...

Kostuch Media Ltd. - May 23, 2013 0
Kostuch Media (KML) and FHG International, Foodservice and Franchise Consultants,  in cooperation with Ryerson University, are pleased to announce the launch of the 2013...