According to the NRN, the company has developed an app that allows customers to order ahead using smartphones. The system uses a GPS locator to recognize when the person placing the order is near, giving the kitchen a signal to prepare the order. The beta test has been rolled out in a few Orange County, Calif. locations.  [Nation’s Restaurant News] 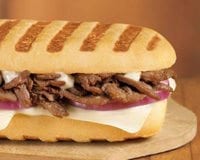